​In this study, psychosocial well-being reflects the close connection between psychological aspects of individual experience and the wider social experience that is expressed through an individual’s positive cognitive, emotional and behavioral functioning (Sameroff, 2000).

​There are three primary frameworks of positive functioning that I build from in selecting my key indicators of adolescent psychosocial well-being i.e.,
So how did we ensure that the markers of PWB (i.e. PS, PO, and PC) were distinct? Or, how did we ensure the scales were distinct? We used EFA and CFA (see below).
​Through split-half cross-validation, the derivation group with 936 respondents was used for exploratory purposes (EFA), and the validation group with 882 respondents was used to confirm the structure of PWB found (CFA).

​Items were dropped if they significantly contributed to loading patterns that were far from the hypothesized structure. Six items were dropped as they had loadings less than .3 and issues of cross-loading across factors; three of which upon further inspection had a weak Malay translation given a lack of local words identical in meaning.
Final structure is provided below. 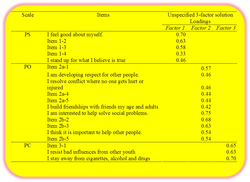 ​The final unspecified three-factor solution in EFA provided clear support for three distinct factors, i.e., PS, PO, and PC, with 19 items loading at 0.3 or higher onto each factor (see Table 1)[1]. In fact, this 3-factors solution was far superior to a 4-factor solution that was initially tested in EFA (not described here).

[1] Given that the three factors correlated above .4, a decision was made to rely on the final structure obtained through oblique rotation (i.e., Promax).

​Structural Equation Modeling (SEM) specified by AMOS 5.0 (Arbuckle, 2003) was used to validate the factor structure obtained through EFA above. SEM procedures are described elsewhere (Bollen & Lennox, 1991; Muthen, 1994). None of the observed items were allowed to cross-load on other factors, and none of the errors were correlated. Model fit was determined by observing fit indices. 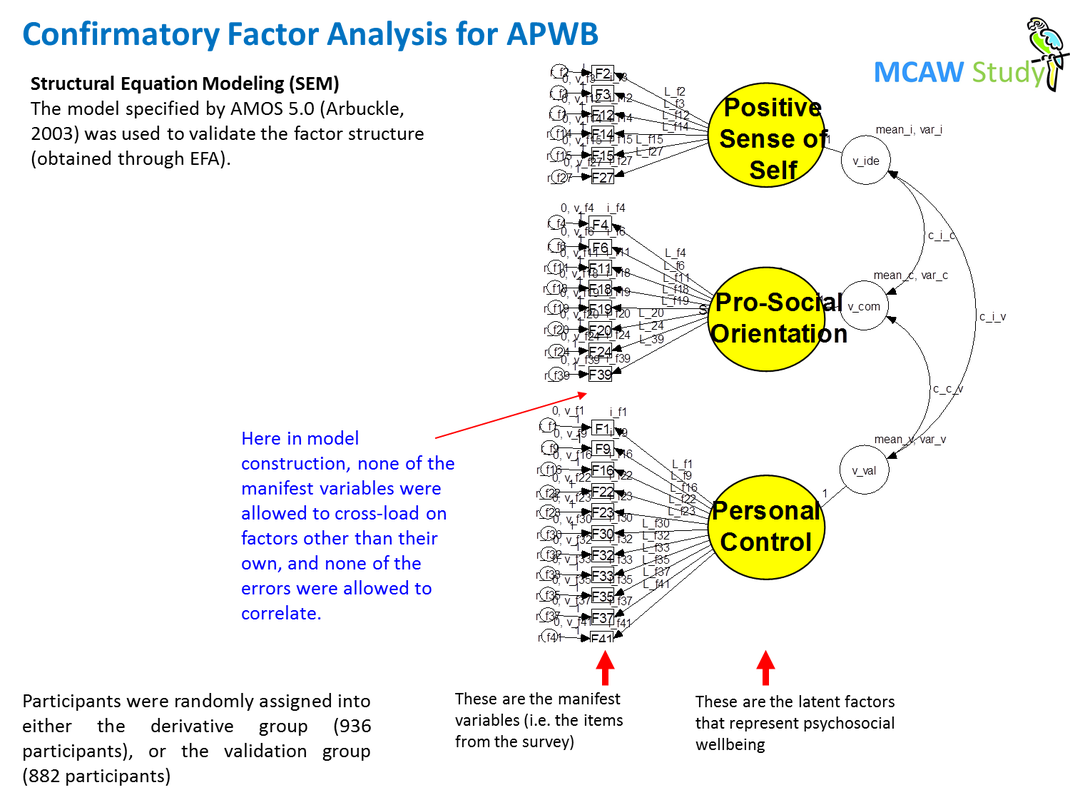 The results were compared to a baseline independence model (where factor loadings, factor invariance and factor covariances were set to 0).

Need to know more about Confirmatory Factor Analysis, click here
​That these items, derived from American measures, were able to fit a conceptual and measurable model in Malaysia is encouraging. Further, that this 3-factor psychosocial well-being model provides satisfactory fit for both boys and girls (not shown above), permits the use of the same measures for future work on gender comparisons. ​

Until more recently, most research equated well-being with the absence of disorder or disease (Moore & Keyes, 2003). Rather than using indicators of a lack of well-being to measure well-being, this study explored the use of positive indicators that reflect positive psychosocial functioning. Being able to measure these key areas may provide us with indicators of how well societies are nurturing their young for present and future functioning in their social environment. These indicators may also provide us with outcome markers that we can target in programs aimed at promoting healthy youth development (Zaff, Smith, Rogers, Halle & Bornstein, 2003).